It’s been a while since I have  been up to Vermont on Route 100…sounds perfect.

I became instantly and shockingly awake when I pulled up to the gas pump.  $5.99 a gallon????  Are you kidding me. I didn’t think I was buying racing fuel.   But yes…its after Memorial Day and gas prices always go up…..there is always some excuse…funny they never tell you they want to make a lot more money!  Good thing the Harley gets 40 miles a gallon.

Taking my usual route that I take to get to the starting point in Hollis New Hampshire, I decide to pull over at a McDonald’s to grab a quick breakfast sandwich so that I can eat it and keep going instead of having a sit down breakfast. I drove around the McDonald’s twice before I realized it was not a drive-thru McDonald’s.  I decided how bad going to be?  So  I pulled in and there was nobody at the counter taking orders.  All the orders had to be entered electronically and there were about 15 people waiting.   Ah the joys of post pandemic life !  I jumped back on my bike and continued.

One of my favorite barbecue places is Smokehaus in Amherst New Hampshire.  Although  I’m not a big fan of the pellet smoker that they use (I’m more proponent of using real wood),  the barbecue is great.

The best thing on the menu there is smoked brisket chili.  It’s meaty, it’s rich, and doesn’t have a lot of beans.  Given that I try to be a low-carb kind of guy,  it’s nice that they offer a mixed green salad with pulled chicken.  Lots of chicken and field greens. They need to upgrade the dressing though. ( Ken’s  packets???) With a full stomach of barbecue I saw to jump back on my bike.

When I ride, what I typically do is a plug in my destination and then  start looking for side roads.  Well, I found an absolutely beautiful road right outside of the barbecue place that took me past a  US space station outpost.

I turned onto Route 103 to 114 but and entered the town of  New Boston.  Tempting fate, I  took an unplanned left hand turn, jumped on 149, having no idea where it led.

Some of the greatest motorcycle roads are the ones where you have no expectations.  Route 149 definitely fit into that category.   A great twisty mountain road with not very many people on it.  I arrived in the town of Washington, New Hampshire, which  was one of the first towns in the country to be named after General George Washington in 1776.

The Washington General Store has a full-service restaurant with groceries, liquor, a deli and an ice cream stand.  It’s  the same General Store you find in any small town.

I asked the woman behind the counter “what do you recommended?”  She said that the mint ice cream sandwiches were to die for.  I also spied some chocolate chip cookies.  I am a chocolate chip cookie addict and always ask the same questions  “Do you make them here?  How are they?”

The chocolate chip cookie didn’t disappoint. They were filled with chunks of chocolate, soft and chewy.  For someone who watches their carbs, it was still totally worth it! 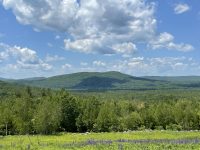 This road also did not disappoint:  beautiful valleys, tight turns and up-and-down mountain passes that continued into  Vermont.  Some of my favorite roads are either twisty roads and ones that go along a lazy river bed .  Route 131 did both, going along this beautiful, lazy river bed.  I took this road all the way into Ludlow arriving at Route 100.

Every motorcyclist talks about the beauty of Route 100. Having just returned from some incredible riding in North Carolina I would have to say the route 100 was a little bit disappointing.  The road was very choppy, had a lot of frost heaves in it and it wasn’t as scenic if I remembered.  My original plan was to take Route 100 all the way down to the Mass border then take Route 2 home.

Once again the devil may care attitude over. I pulled to the side for a quick break and checked my map.  I noticed Route 121. I don’t know very much about it… I had never been on it…  What the hell! I took and chance and it was so rewarding.  Route 121 was  absolutely breathtaking. It wound through fantastic scenery and  there was absolutely no one on it.  I have a rule. If you‘re doing something you really enjoy…don’t change it.  I figured I’d take 121 to the end…. and then Google  maps surprised me….  121 stopped and turned into a dirt road. 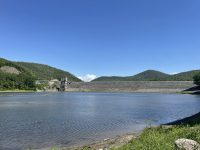 I’m really not a fan of dirt roads  because you have no idea what the terrain will be like.  I’ve been on several dirt roads that ended up with a chain-link fence across them that you couldn’t go past.  I decided to bail and find my back to Vermont 30 that ends up in Brattleboro.  I pulled  into the  Townsend dam recreation area.  The views were awesome and it was a great place for a rest and stretch.

Rested and energized, I started off on my final leg pf the journey.   A few miles past Townsend, a fire engine was across the road with a sign that said….Road Closed.  I asked the fireman for a detour. His response, typical New England, was  “Just follow the other cars”.

We started in and the road immediately went to dirt. I looked down at Google maps and noticed we were driving on nothing. The road we were on wasn’t even listed!   I hate when technology fails you at the worst possible moment!  I took a deep breath. As long as there are cars in front of me..I’m good.

Out of nowhere appeared a fork in the road.  Some cars went right and some went left. Now what?  I flipped a coin and went right.  Bad choice.  The road got really sketchy and within a couple of minutes, I saw cars turning around.  I was on a dust filled  uphill dirt road with traffic coming both ways.  Turning around for me would be impossible.

I finally found a driveway that I was able to pull into to turn.  The owner explained a series of rights and lefts to get back to Rt 130.  I looked again at Google Maps…nothing   I was a dot in the middle of a whole field of white.  I turned around and started to try to remember his instructions.  I then realized that there was a line of cars now following me. Pressure is on!  I started to sweat a little bit as a paved road was nowhere in sight. What if I made the wrong turn?

When I was at my lowest, Google maps finally woke up and plotted a path back. After 10 miles and 35 minutes we were back on Rt 30.  I heard at a rest stop later that the detour was because of a bad motorcycle accident.  I said a prayer and started home.

After passing Hinsdale on 119 with a  park and nice waterfall in the center of town, I found myself at my favorite ice cream stand…Kimball’s.   One vanilla blueberry crumble ice cream later and I was home safe, sound and exhausted. Total riding time is about 10 hours with stops and about 282 miles.  Success! 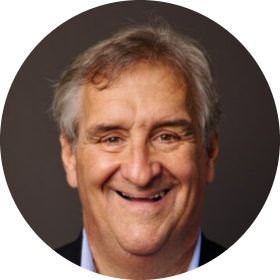